Home » TYPES » Bulbs » Bobartia orientalis subsp. orientalis
Back to Category Overview
Total images in all categories: 12,068
Total number of hits on all images: 7,363,028 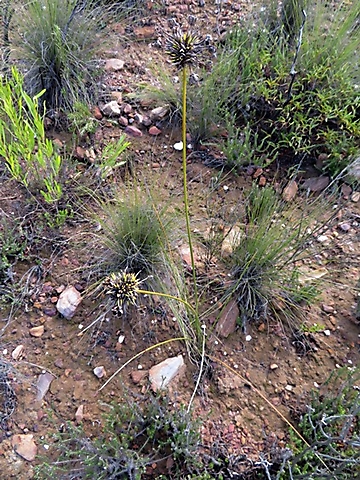 Bobartia orientalis subsp. orientalis is an evergreen perennial growing from a rhizome.

It produces a tuft of smooth, cylindrical leaves that are about erect, from 40 cm to 130 cm long. The fibrous leaves are tough and rush-like. The plant in picture has very few of them and at the time of the photo its leaves are mostly dry, but it still managed two flower stems.

The star-shaped, yellow flowers of Bobartia orientalis may be seen from before midwinter to summer.

The species distribution is in the southern parts of the Western and Eastern Cape from the west of the southern Cape to east of Makhanda. The photo was taken in the Kouga during May, after bloomtime.

The habitat is dry fynbos on stony, sandy slopes. The subspecies is not considered to be threatened in its habitat early in the twenty first century.

The leaves and maybe stems of this plant are or were used in weaving baskets (Manning, 2007; Bond and Goldblatt, 1984; Gledhill, 1981; iNaturalist; http://redlist.sanbi.org).