Home » TYPES » Bulbs » Bobartia fasciculata
Back to Category Overview
Total images in all categories: 12,068
Total number of hits on all images: 7,363,075 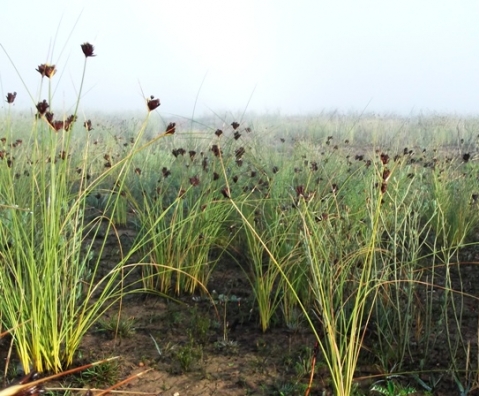 Bobartia fasciculata is one of the rush irises, evergreen perennials that grow tufts of long, cylindrical (terete) leaves from rhizomes. It looks more like a restio than an iris, especially when not in flower.

This stand of B. fasciculata, growing in the Elandsberg Private Nature Reserve has returned to maturity much faster than its competition after a recent veld fire. The underground rhizome that survives the fire, allows the plant to resprout new leaves quickly from stored resources, well before reseeder plants can usually achieve size.

The flowers of B. fasciculata are seen from late winter to end spring. They are yellow, growing in terminal heads. The leaves of this species grow about as tall as the flower stalks, reaching heights around 80 cm to 1,5 m.

The species distribution lies in the Western Cape from around Tulbagh to Citrusdal. The habitat is dry fynbos slopes between elevations of 350 m to 750 m.

Populations of this plant in habitat are believed to be reducing due to farming, especially rooibos tea plantations that take their space early in the twenty first century.

The photo was taken at the end of May, long after flowering (Bond and Goldblatt, 1984; www.redlist.sanbi.org).