Home » TYPES » Bulbs » Arctopus monacanthus female plant
Back to Category Overview
Total images in all categories: 12,068
Total number of hits on all images: 7,363,268 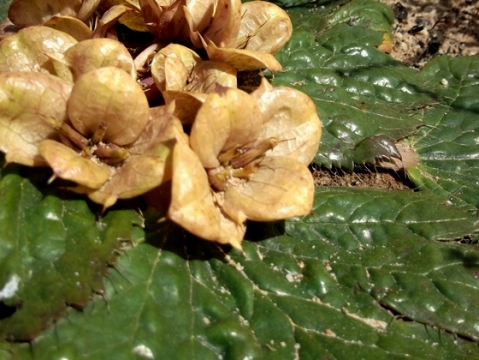 Arctopus monacanthus, commonly the paper bearpaw, is a stemless perennial from the carrot or Apiaceae family that grows from a thick taproot.

The simple, stalked leaves are prostrate, spreading in a rosette. The spines on paper bearpaw leaves arise from the marginal teeth. Leaf surfaces are glossy dull green, quilted from bulges among the sunken veins. Arctopus plants are commonly known as sandholly and in Afrikaans as platdoring (flat thorn) from the spines on the leaf margins.

The yellow male and female flowers grow on separate plants. The female flowers in picture have reached the fruiting stage, surrounded by enlarged, fawn coloured bracts. The rounded bracts appear papery, possibly accounting for the common name of paper bearpaw. Flowering happens in winter, the photo taken by October. Small apical spines are present on the bracts in picture.

The generic name, Arctopus, is derived from the Greek words arctos meaning bear and pous meaning foot, referring to a supposed resemblance of the leaves to bear paws.

The species grows from the Cape Peninsula northwards along the west coast of the Western Cape, found on seasonally damp slopes in sandy and clayey soils at low and middle elevations. This plant was seen in the Gifberg. The species is not considered to be threatened in its habitat early in the twenty first century.

The Arctopus genus comprises only three species, all South African, in the west and south of the country (Manning, 2007; Bond and Goldblatt, 1984; Andrew, 2017; iNaturalist; http://redlist.sanbi.org).