Home » TYPES » Bulbs » Arctopus echinatus
Back to Category Overview
Total images in all categories: 11,921
Total number of hits on all images: 7,169,765 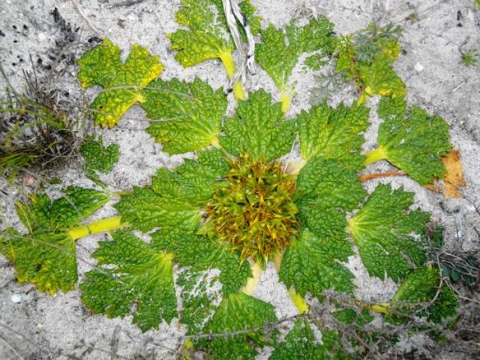 Arctopus echinatus is a geophytic plant in the Apiaceae family. The dioecious species (sexes on different plants) grows flowers in the centre of the prostrate leaf rosette. The plant in picture is female. There are marked differences between the sessile (stalkless) female flowers, each surrounded by spiny tipped involucral bracts and the white or pink male flowers that do have notable stalks.

The thick, tuberous taproot is much used in traditional medicine. One of its Afrikaans names, sieketroos, means comfort for the sick. The plants have been used medicinally in olden times by the Khoi tribes. The dried roots are still on sale around the Cape.

The rosette is made up of large, glossy leaves that radiate outwards on the ground from the plant base on thick, yellowish, spongy petioles. The leaf-shape is ovate and lobed, but variable, also in size. Some sharp spines occur among many bristles along the margins.

The genus has only three species, all found in the Western Cape fynbos, although A. echinatus also occurs in Namaqualand in the Northern Cape and the Eastern Cape (Van Wyk and Gericke, 2000; http://redlist.sanbi.org).