Home » TYPES » Bulbs » Apodolirion lanceolatum
Back to Category Overview
Total images in all categories: 12,068
Total number of hits on all images: 7,363,110 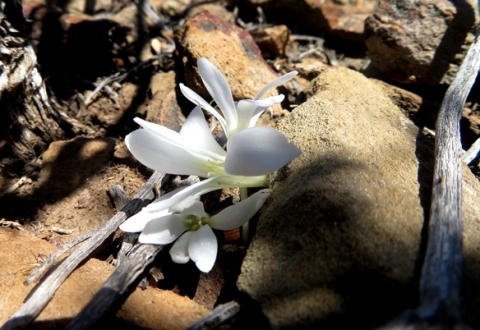 Apodolirion lanceolatum is a winter-growing, bulbous geophyte of the Amaryllidaceae family. The deep-seated, globose bulb of up to 3 cm in diameter has a subterranean stem or neck up to 6,5 cm long. Several layers of dark, fibrous tunic cover the bulb, while the old, deciduous leaf bases persist around the neck up to ground level.

The plant grows a solitary, lance-shaped leaf tapering abruptly to an acutely pointed or blunt tip. The leaf may be about prostrate or variably angled to nearly erect, from 3,5 cm to 6 cm long and 4 mm to 8 mm wide. The blade is flat, smooth, dark green to blue-green. The margins may be flat, sometimes crisped. The underground leaf sheath is membranous and pale brown.

The species distribution is along the southern Cape coast from Swellendam to Stilbaai and inland in the Little Karoo eastwards from Barrydale. The photo was taken in the veld southwest of Oudtshoorn at Minwater in January.

The habitat is exposed, rocky, shale slopes where the plants grow in dense stands of up to twenty among karoid vegetation in clayey soils and coastal flats. The status of the species population in habitat has not been determined due to taxonomic uncertainty; the coastal and inland populations differ (Duncan, et al, 2016; Leistner, (Ed.), 2000; Bond and Goldblatt, 1984; iNaturalist; http://redlist.sanbi.org).