Home » TYPES » Bulbs » Ammocharis longifolia
Back to Category Overview
Total images in all categories: 12,068
Total number of hits on all images: 7,363,110 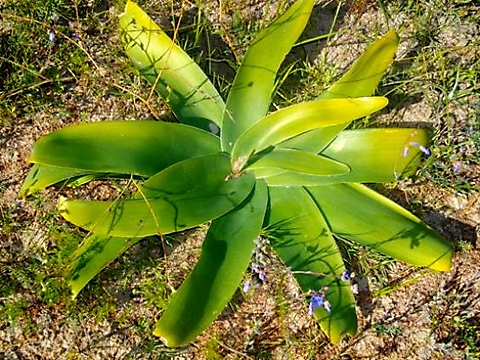 Ammocharis longifolia, in Afrikaans known as the Malgaslelie (Malgas lily), is a winter-growing geophyte with large, about spherical bulb, 10 cm to 20 cm in diameter. The bulb tunic consists of several hard layers ending at the top in a neck of variable length.

The strap-shaped leaves spread in two opposite fans or are prostrate, sometimes curved. Leaf surfaces are blue-green, here already mostly yellow-green at the end of August; absent at flowering. The leaf margins are finely toothed.

The inflorescence is an umbel of up to 90 flowers on a scape of up to 30 cm long. The large, laterally symmetrical flowers are about trumpet-shaped, cream to pink and darkening with age. They are sweetly fragrant. Flowering happens from summer to early autumn, mostly after fire.

The species distribution is in the winter rainfall west of the Western Cape and the Northern Cape, also in southern Namibia.

The habitat is exposed places on sandy and gravelly flats. The species is not considered to be threatened in its habitat early in the twenty first century (Duncan, et al, 2016; Manning and Goldblatt, 1996; iNaturalist; http://redlist.sanbi.org).