Home » TYPES » Bulbs » Ammocharis coranica
Back to Category Overview
Total images in all categories: 11,528
Total number of hits on all images: 6,610,494 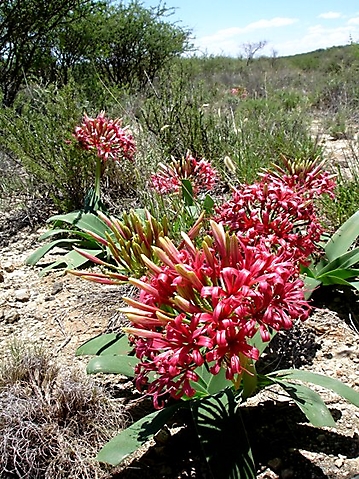 Ammocharis coranica, commonly the ground lily, is a deciduous, summer-growing geophyte reaching heights from 25 cm to 35 cm in bloom. The globose bulb is up to 20 cm in diameter, covered in brown cartilaginous tunics.

Strap-shaped leaves, nine to fifteen in number, spread near ground-level in two opposing fans, roughly forming an X. They are glaucous or blue-green, smooth and slightly curved to sickle-shaped and not strongly sheathed. Tiny marginal teeth are present and the blunt tips are often withered. Only first growth of the young bulb has pointed leaves. Leaf dimensions are 30 cm to 45 cm long, 1,5 cm to 4 cm wide.

Up to three angled scapes, about 20 cm long, carry the inflorescences. They are topped with umbels of up to 25 cm wide, bearing 20 to 60 flowers each. The spathe bracts at the umbel base are up to 6 cm long. The green pedicels of 4 cm long do not elongate in fruiting.

The sweet-scented, funnel-shaped flowers are radially symmetrical, deep pink but several shades occur. The perianths are straight, from 8 mm to 25 mm long. Six exserted stamens rise at the perianth tube mouth, spreading on unequal filaments. The inferior ovary is oblong, the style exserted.

The capsule is nearly globose, the fleshy seeds up to 15 mm in diameter. The fruits do not develop into tumbleweeds.

The species distribution is widespread in southern Africa to Angola, occurring in all nine South African provinces.

The plants are adapted to sandy as well as clayey soils in dolomite, often among stones or in hot, dry, rocky places. The bulbs can survive several years of drought and appear rapidly after rain. The species is not considered to be threatened in its habitat early in the twenty first century.

The generic name, Ammocharis, is derived from the Greek words ammos meaning sand and charis meaning grace, referring to the sandy places where the plants grow and the charm of the flowers. The specific name, coranica, is derived from the name of the indigenous Korana tribe that shared some home regions with the plant (Duncan, et al, 2016; Vlok and Schutte-Vlok, 2015; Manning, 2009; http://redlist.sanbi.org).