Home » TYPES » Bulbs » Amaryllis belladonna
Back to Category Overview
Total images in all categories: 11,528
Total number of hits on all images: 6,610,562 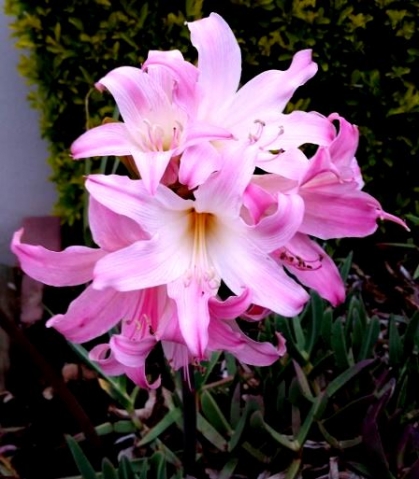 Amaryllis belladonna is a deciduous, winter-growing bulbous plant reaching heights from 42 cm to 95 cm when in flower. The slightly laterally compressed bulb with hard tunic, up to 10 cm in diameter, produces offsets, new bulbs that can grow separately.

Strap-shaped, channelled leaves, from six to twelve in number, grow in two arrays opposite each other, enclosed at the base by a long, dark maroon sheath. The nearly erect leaves become up to 72 cm long and 5 cm wide. The leaves are semi-succulent, hairless and smooth on both surfaces. The midrib is prominent on the lower surface and the margins flat and entire. Leaf colour is pale to dark green, but the leaves are dry at bloom time.

The inflorescence is an umbel of six to seventeen flowers at the top of a sturdy peduncle, 35 cm to 90 cm long. The six-tepalled flower is trumpet-shaped, radially symmetric and about 8 cm in diameter. The blooms are sweetly scented. The tepals, arranged in two whorls of three, curve outwards in their upper third. The filaments of the (six) stamens, long enough for the anthers to be just exserted beyond the corolla mouth or nearly so, curve up near their tips. The anther bodies are also curved, their pollen cream or pale yellow.

Amaryllis was a popular name for a shepherd girl during the Classical Period, used in writings first by the Greek poet, Theocritus and later by the Roman ones Virgil and Ovid. The proper name had been derived from the Greek word amarysso meaning to sparkle.

In the eighteenth century the name was adopted for some bulbous plant with pretty flowers by Linnaeus. There was a controversy as to whether he meant it for the Cape’s naked lady, the plant discussed here, or for a genus of South American bulbs as, for a time, the two were combined, sharing this name; the split and the problem coming only later.