Home » TYPES » Bulbs » Adenia pechuelii
Back to Category Overview
Total images in all categories: 12,068
Total number of hits on all images: 7,363,198 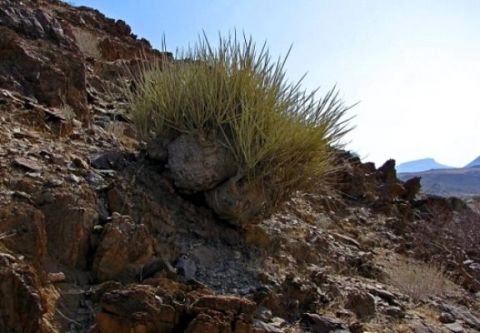 Adenia pechuelii is a caudiciform plant of Namibia, not South Africa. It becomes up to 1 m tall, growing a thick caudex that is smooth and grey-green. Numerous short branches, thick and rigid emerge from this above-ground tuber-like stem part, squat to rounded, based on a tap root. The blue-green branches are grooved, tapering to tips from which few secondary branches grow.

Only a few, simple leaves, spirally arranged to alternate, are produced but not retained on the stems for too long. They are elliptic with entire margins tapering to acutely pointed tips and rounded bases. The blades are blue-green and leathery. The petiole is about absent to 3 mm long.

Small, cup-shaped flowers are produced, sexes apart on different plants. The petals are lanceolate, smaller than the sepals. Flowering happens from late summer to early winter. The fruit is a near globular, slightly flattened, three-segmented capsule that ripens red, about 2 cm in diameter.

The distribution is a broad coastal swathe in the northern parts of Namibia, the Namib Desert. The plants usually grow from rock crevices and desert rocky outcrops. The largest specimens are believed to be found in the Brandberg (Mannheimer and Curtis (Eds.), 2009; iNaturalist).