Home » GENERA B-C » Brachystelma » Brachystelma stellatum flower
Back to Category Overview
Total images in all categories: 8,890
Total number of hits on all images: 3,864,904 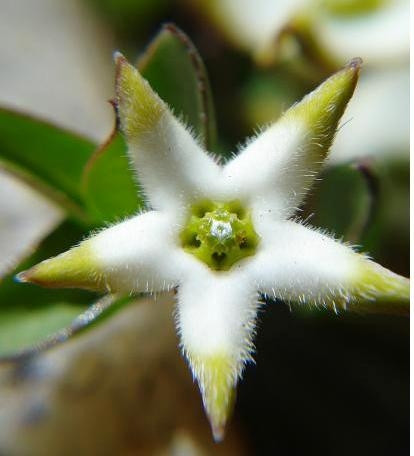 Brachystelma stellatum has opposite, fleshy leaves, broadly ovate in shape. They taper to tips that protrude slightly.

The chubby white and hairy star-shaped flower has characteristic yellow-green lobe tips and centre. In the corolla centre is an intricate structure comprising the inner and outer coronas, topped by a tiny white ring.

B. stellatum grows in the border area between Mpumalanga and Limpopo in a few sites around the Steenkampsberge, the Ohrigstad Dam Nature Reserve and the Long Tom Pass. Its habitat is montane grassland. Although the species is rare, it is not considered to be threatened in its habitat early in the twenty first century.

Most brachystelmas grow from fleshy tubers, some of which are edible (http://redlist.sanbi.org).