Home » GENERA B-C » Brachystelma » Brachystelma macropetalum
Back to Category Overview
Total images in all categories: 8,897
Total number of hits on all images: 3,867,347 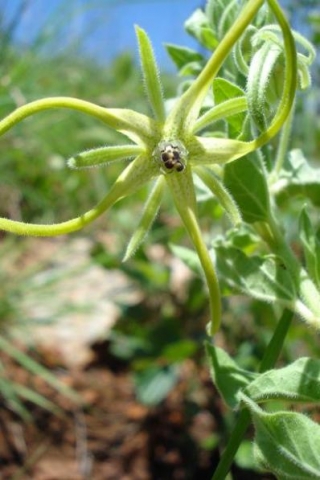 Brachystelma macropetalum is an erect plant reaching 60 cm in height. Stems and leaves are velvety with soft hairs. The opposite, ovate leaves are stalked. They have midribs and lateral veins prominent upon the lower leaf surfaces.

The spidery long, yellow-green corona lobes do not join at the top as they do in the case of several other brachystelmas. It is these petals that earned the plant the specific name of macropetalum, large petals.

B. macropetalum grows in eastern Mpumalanga and Limpopo and beyond the South African border. Its habitat is damp, mountainous parts and rocky woodland. The species is not considered to be threatened in its habitat early in the twenty first century.

Brachystelma is a genus of geophytic herbs with fleshy tubers. They occur mainly in southern Africa, the rest of Africa and Asia. The name means short crown, wreath or garland (Onderstall, 1996; http://redlist.sanbi.org).