Home » GENERA B-C » Brachystelma » Brachystelma gerrardii
Back to Category Overview
Total images in all categories: 8,955
Total number of hits on all images: 3,970,360 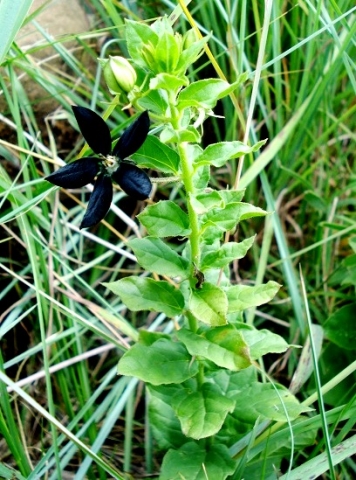 Brachystelma gerrardii is found in the north-east of South Africa, in northern KwaZulu-Natal and Mpumalanga. There is a second distribution area in the Waterberg in Limpopo, discontinuous from the south-easterly one. The plant also grows in Swaziland.

In spite of its large distribution the species population is small and decreasing in nature. One of South Africa’s growing number of threatened plants, the problem in this case is caused by a combination of factors. Among them agricultural and forestry activities, township development, excessive veld fires and more; all man-made. People dig up the roots of this plant as a foodstuff of last resort, a famine food. Survival needs of every species affect its environment.

There are black and blue-green metallic colour forms of B. gerrardii flowers. This black one is common in the more northerly reaches of the species distribution, although the specimen in picture harks from an unexpected area. This plant was photographed in January, south-west of Piet Retief, towards Volksrust.

The green flowering plant, mostly seen in KwaZulu-Natal, is considered to be the more threatened form (iSpot; JSTOR; www.redlist.sanbi.org).