Home » GENERA B-C » Brachystelma » Brachystelma circinatum
Back to Category Overview
Total images in all categories: 9,574
Total number of hits on all images: 4,303,583 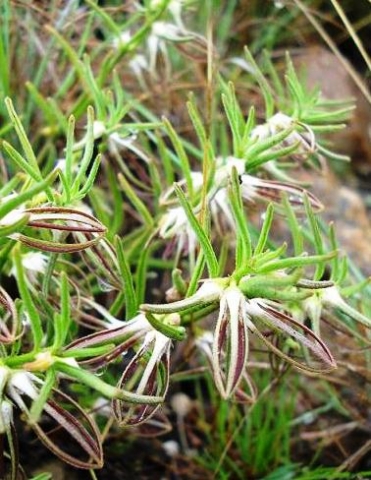 Previous
Image 5 of 23
Next

Brachystelma circinatum produces stems and leaves annually from a somewhat cup-shaped underground tuber. The plant becomes about 30 cm tall. The leaves are sessile, opposite, small and oblong with their margins curled inwards.

The small flowers grow from leaf axils. The flower lobes close in lantern or cage-shape at their tips, similar to the flowers of several species of the genus. The lobes are cream on the outside, maroon inside.

The species is found widespread in South Africa north of the Vaal River, as well as in the Free State and the Eastern Cape, apart from a strong presence in neighbouring countries like Namibia and Botswana.  with considerable flower form and colour variations (Frandsen, 2017; http://redlist.sanbi.org).