Aloe littoralis by a Himba hut 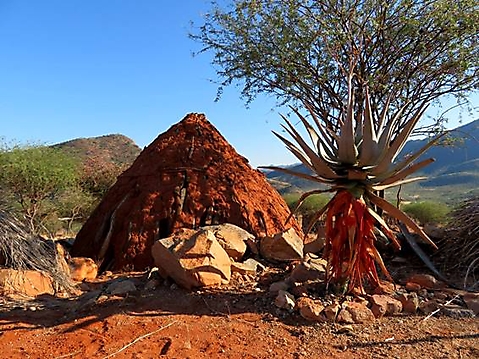 Aloe littoralis, in South Africa commonly the mopane aloe and in Namibia the Windhoek-aalwyn, is a single-stemmed leaf succulent, sometimes regarded as a small tree, reaching 3,5 m in height (SA Tree List No. 29.4).

Previously known as A. rubrolutea, the A. littoralis name used to apply only to a northerly species occurring in Angola and further afield in miombo woodland, before a merger brought the name to South Africa. The specific name, littoralis, saying that the plant grows by the sea, was given way back to the Angolan plant, partly appropriately, but particularly confusing in South Africa (and some landlocked countries of southern Africa), where it is as deeply inland as any Aloe could be in this region. Occurring widespread in conditions of variable rainfall, the plant is variable in appearance, as can be expected.

The large leaf-rosette comprises many lanceolate, grey-green leaves that only curve out near their tips with age, the oldest live leaves angled down. The upper surfaces are nearly flat but channelled near their tips, the lower ones convex. On young plants the leaves tend to have elliptic, white speckles, usually more conspicuous on their lower surfaces, persistent on only few plants.

Small, red-brown to dark brown teeth on a whitish base are found along the margins only. These teeth are closer together near the leaf base; they become about 5 mm long. Leaf dimensions are 70 cm long, 15 cm wide at the base and 3 cm thick. The stem is mostly covered by persistent, down-turned, dry leaves, or nearly so, as in the photo.

The inflorescence consists of a candelabra-like panicle, branched low down and much-branched. It becomes about 1,2 m long, the occasional plant producing a second panicle in one season. The erect, conical racemes are usually sparsely flowered.

The individual flowers or perianth tubes are pale, dusty red to deep red with yellow tips that were greenish in bud. A waxy layer may make the flowers appear silvery. The inner segments are slightly brown-tipped and keeled. The anthers become exserted in two groups of three in succession, the style-tip or stigma exserted further than the anthers.

Flowering happens from spring to autumn, varying according to subregions of the species distribution. Sunbirds are much seen around the blooms in search of nectar. They are gifted pollen as well, preferably only for a while, to be returned to other flowers before they conclude their floral itinerary.

The species distribution in South Africa is limited to north and northwesterly parts of Limpopo, north of the Soutpansberg. The plant occurs widespread in Namibia, Angola, Botswana and Zimbabwe and maybe further.

The photo was taken in the garden of a Himba hut in Kaokoland in the Kunene region. This is where red ochre still plays a role in skin application among the tribal people, a safeguard against dry skin in the fairly inhospitable environmental conditions; or a cultural habit firmed up in tradition.

The Aloe’s habitat is flat or fairly flat woodland, bushveld and wooded grassland, particularly mopane veld in South Africa. More commonly, it grows in the miombo woodland to the north that ranges across southern Africa from Angola to Mozambique, well beyond the South African border.

The plants grow in well-drained, limestone or other alkaline soils. The species is not considered to be threatened in its habitat early in the twenty first century (Mannheimer and Curtis, (Ed.), 2009; Van Wyk and Smith, 2003; Coates Palgrave, 2002; Reynolds, 1974; Jeppe, 1969; http://redlist.sanbi.org).