Home » GENERA A » Aloe » Aloe longistyla cohesive community
Back to Category Overview
Total images in all categories: 11,538
Total number of hits on all images: 6,617,923 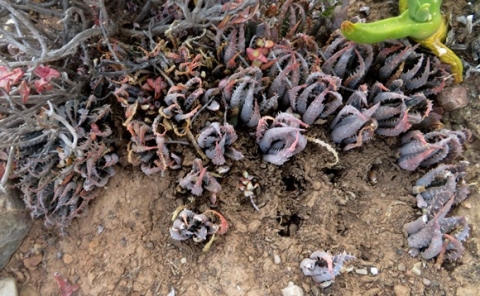 This dense stand of Aloe longistyla cohabiting with a Glottiphyllum was seen on Jakkalskop at Calitzdorp during September. Some of these rosettes may represent individual plants while others may be branched from the same stem. A. longistyla often branches into two or three leaf rosettes, rarely in clusters of up to ten.

One of the risks this species faces in nature is illegal plant collections, as clearly happened here. The greedy collectors are unlikely to have success with this Aloe as it fares poorly in cultivation. Some may still be sold before they die, as such a rosette can be potted for the market to die slowly, by which time it is hard to reverse the transaction.

Over-grazing in the Karoo plays its part in the survival risk of the species. Drought is another factor that interacts with farming practices. Severe and prolonged droughts seem to occur more frequently these days in big parts of inland South Africa (Vlok and Schutte-Vlok, 2010; Van Wyk and Smith, 2003; Reynolds, 1974; Jeppe, 1969).