Home » GENERA A » Aloe » Aloe castanea germinating in favourable conditions
Back to Category Overview
Total images in all categories: 10,196
Total number of hits on all images: 4,860,004 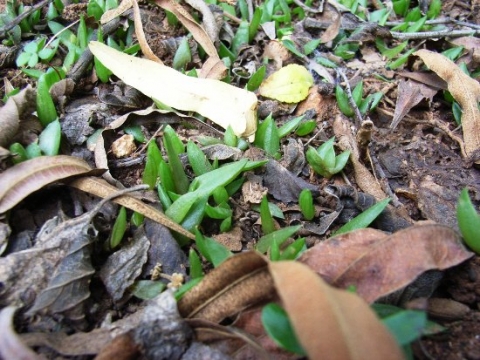 These Aloe castanea seedlings germinated from racemes with seed capsules left in a Magaliesberg garden. Moisture must have been sufficient, temperatures conducive, the seeds did not blow away, insects and birds did not eat them and dry leaf mulch was conveniently available when needed.

Whether they will all turn out to be pure A. castanea plants, remains to be seen as many other aloe flowers appearing concurrently in the neighbourhood could have contributed to hybridisation. Species known to have hybridised in nature with A. castanea include A. burgersfortensis, A. cryptopoda, A. davyana, now A. greatheadii var. davyana, A. globuligemma and A. marlothii. And these species are just the natural habitat neighbours normally sharing the same flowering season with A. castanea. Add to this the simultaneous (winter) flowering species in any large aloe garden and much could happen!

To grow this plant from seed is easy, but waiting for this kind of luck to happen spontaneously in the garden may involve much time (Reynolds, 1974).